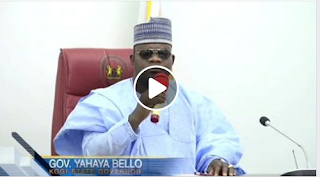 Gov Bello Charges Electorate on Peaceful Conduct During and After General elections
Governor Yahaya Bello of Kogi State has charged the people of Kogi State and Nigerians at large to conduct themselves in a peaceful and rancour-free manner during and after the Saturday presidential and National Assembly elections across Nigeria.
The Governor charged the people of the State, to go all out and vote peacefully in the Saturday Election.
He stated that election was not a do or die affair, urging the citizens to be law abiding before, during and after the electioneering process.
Governor Bello also charged the Law Enforcement Agencies to be diligent in the performance of their duty, by ensuring that hoodlums with plans to disrupt the process were decisively dealt with.
While he called on law abiding citizens to report any frivolous or criminal events to respective security agency, he assured of a successful outing for the All Progressive Congress at the polls.
By UNCLE B🤗
Labels: election, govornor, gyb, kogi, yahaya bello